Today is the day we have circled on our calenders all year long and that is the fall or autumnal equinox. This  day marks the end of summer where the length of night and the length of day are more or less equal. "We have an equinox twice a year – spring and fall – when the tilt of the Earth’s axis and Earth’s orbit around the sun combine in such a way that the axis is inclined neither away from nor toward the sun." (Deborah Byrd, Earth Sky - A clear voice for science 9/22/11) The most stressful time of the year for Granite Bay or any course with cool season turf is from the summer solstice to the fall equinox hence the circle on the calender and sense of relief. 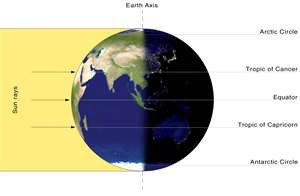 What does this mean for the course? It means that the potential for drastic turf loss due to summer stress is moving behind us. It means that even those little areas of turf that have experienced thinning this year will soon start to recover. Even though this can be the most difficult time of the year to irrigate, the fall equinox means that our soft areas will soon start to firm up.
2011 Summer in Review
This has always been a good time of the year for me to review  summer success's along with setbacks and set goals for the future summers. The course is not in perfect shape as we conclude September, but for the most part not bad especially when compared to summers past. By any ones account the success's we experienced at during the 2011 summer are mostly attributed to the mild temperatures we experienced. The course's weather station only recorded 5 days over 100 degrees and most of these were separated by days if not weeks. There were no 100 degree days in August and only 2 in July. In comparison the courses weather station recorded only 8 days over 100 degrees in 2010, 15 days in 2009 and 13 days in 2008. The total of days over 100 degrees do not tell the whole story of the severity of a summer but can be a gauge we can all relate to, because when it's over a 100, it's hot.

﻿﻿﻿﻿Admittedly the mild summer temperatures was the secret to our success in 2011, however the plans we put in place to combat some of the substandard conditions we experienced last season did make a difference and should help  in future summer months moving forward. These included aggressive core aeration of all of the turfgrass surfaces, substantial irrigation enhancements particularly around the greens, a stepped up emphasis on hand watering and a different approach to disease and insect prevention. The dynamic, growing nature of turfgrass and its surrounding vegetation makes golf course maintenance a perpetual work in progress and it of course difficult to predict the future. We can however predict that next year there will be another summer and it most likely will get hot. So for now we embrace summers like 2011 and at the same time  continue to remain diligent in making  improvements  in preparation for the next one.
Other accomplishments have been made in 2011 that set us up for future successes as well.  The completion of our sand trap renovation along with completing the resurfacing of our tees  will really free up resources and provide added focus on  more consistent putting surfaces and firmer end of season conditions. We will be discussing the details of how we plan to achieve these goals moving forward  but wanted to reiterate to our members that these goals have been and still remain a priority. We are  looking forward to spending  more time in these areas and  making a difference.
However 2011 is not over yet and we have plans for the remainder of the year. These plans include first and foremost more brush clearing. The  clearing and pruning will start shortly after course aeration in front of the rear tees on #14 and continue in what I call the 13,14,15 triangle. This is that large area of native vegetation bordering right of #13 & #14 and left of #16. Along with this area there is also some pruning work that needs to be done on the left of #13 & #14 as well.
﻿﻿﻿﻿﻿﻿﻿﻿
﻿﻿﻿﻿﻿﻿﻿﻿2011 Fall Aeration﻿
On July 12th 2011, the Granite Bay Golf Committee unanimously approved additional alternating front nine / back nine closures beyond our normal alternating dates for putting surfaces to accommodate core aeration of the fairways and green surrounds. I mentioned the details of this request in the July 8th Granite Bay Course Update. As I mentioned in the update, my request was based on  the overriding principle that the cleanup of extracted cores during aeration must be allowed to dry for effective processing and the most productive and least obtrusive  way to achieve this is to allow for some additional F9 / B9 alternating closures.
Hopefully the vast majority of the membership will see the upside to these additional alternating closures such as:


In conclusion we are adding 4 alternating closure dates to our aeration schedule but are hoping to complete the entire task more efficiently and cleanly in 5-6 weeks rather then 9-12.

The newly renovated practice area is coming along nicely. The hybrid bermuda sprigs surrounding the green came in better then expected. Most areas are enjoying turf coverage of over 50% and the rest is coming on strong due to the aggressive stolons and rhizomes (creeping stems and roots) of the  hybrid bermuda. Its ability to cover bare ground is unsurpassed particularly with the warm weather we have been experiencing and it has been fun to watch the area transform so quickly. Soon we will overseed with perennial ryegrass  for winter color and after some grow in time we will be open for business. The only setback I currently see is the not as rapid establishment of bentgrass seed on the target green expansion.

The expansion of the putting surface is definitely coming slower then the hybrid bermuda around it. Even though established bentgrass tends to be fairly aggressive in our summer climate, germinating bentgrass seed would prefer a little cooler weather. Our initial seeding was just over three weeks ago and we have applied a second seeding just recently which should germinate shortly especially with the upcoming weather changes.

New Divot Mix
Some of you might have noticed a new divot mix starting to surface in the divot bottles and on the course. We built a large bunker in the maintenance yard to store sand during sand trap renovation.  Now that this renovation is complete, we can use this bunker to mix and store a divot mix for divot's and course repair rather then just straight sand. This 50/50 sand - compost blend will aid in the germination of seed  which is added to the mix along with providing a camouflaged appearance on the course as opposed to all of the white patches.  The current mix might have a little too much compost in it so we will continue to fool around with the recipe of our blend until we find just the right mix for Granite Bay. 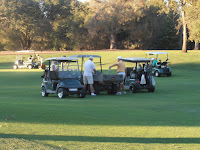 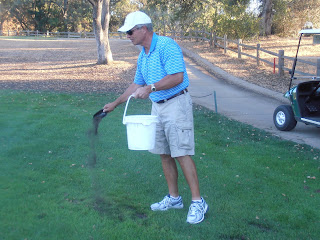 Rolling out this new mix just happened to coincide with a recent "Sand-n-Seed" Outing hosted by the Granite Bay Golf Committee. The following is an excerpt from a re-cap of the outing provided by Craig Johns.
"The first installment of the "Sand-n-Seed" Outing was, from my perspective, a fantastic success.  Although the head-count was only 18½ people (my four year old, Jackson counting for the "half"), it seemed as if there were dozens of folks out, enthusiastically helping to improve the conditions of our golf course.  My personal goal for the evening was to get six holes of divots filled, the crew was able to finish the entire Front Side just as dark descended.  And while we didn’t fill in 100% of the divots on those nine holes, an unscientific assessment (after checking out the course this afternoon) is that we managed to get about 90% of them." 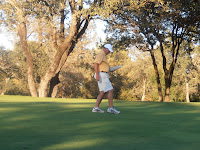 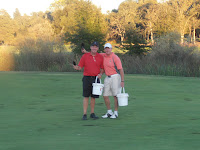 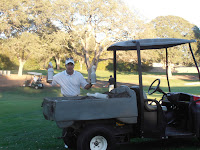 I was concerned / curious about how the group would view the new divot mix because it is a bit pungent but reports were that the group liked the appearance of the mix on the course as opposed the straight sand despite the bouquet. One consequence that I have noticed with the mix as opposed to straight sand is that if a divot is filled to high and not smoothed before it gets irrigated, when the mowers go over the wet mound of mix it leaves a streaking mark that is not the most attractive.  I think getting more sand in the mix will help with this situation along with smoothing out the mix. Our Thanks to everyone who volunteered. I look forward to being a part of the next outing.
﻿﻿
﻿﻿Conclusion
Thank you for the kind words and support of our efforts in providing the membership a course you can be proud of. It is our hope and desire to build on the success's of this 2011 summer and create even better conditions for  future summers. This would not be possible without your support. Thanks again.
Posted by Matt Dillon - Golf Course Superintendent at 6:09 AM No comments: