As we are all aware, California is in the midst of its 4th year of historic drought which has been an all consuming issue for the States Golf Industry. On April 1, 2015, Governor Jerry Brown issued an executive order that directed the State Water Resources Control Board (SWRCB) to implement mandatory water restrictions mandating a 25% statewide reduction in potable urban water use from a 2013 baseline. The SWRCB came up with emergency regulations to achieve the 25% mandated reduction from 2013, dividing California cities into eight levels of conservation based on  residential gallons per capita per day (R-GPCD). Out of 411 statewide urban water districts the San Juan Water District (SJWD) was 406 requiring a 36% reduction  from thier customers. Granite Bay Golf Course does not purchase potable water for golf course irrigation but has assured the SJWD we will do our part and meet the conservation standard set by the SWRCB and the SJWD.


We have been doing our part. We purchased 46% less non-potable water for golf course irrigation from the SJWD in 2014 as compared to 2013. Additionally we conserved 25% potable water from our combined potable meters in 2014 compared to 2013. We achieved these results on the golf course by capturing more surface water in our irrigation lake, reducing irrigation to the course through the irrigation system and supplementing  that reduction with additional hand watering. Conservation results from our combined potable meters were primarily achieved by using compressed air to clean equipment.


All things being equal, we should be able to meet the 36%  conservation requirement from the SJWD this year based on our results last year. We monitor our use daily and can make adjustments as needed. Conservation strategies this year will be much the same as last year with some added polymer and surfactant applications which will help our soils retain more  moisture. Additionally during summer temperature extremes we will restrict cart traffic to cart paths only.

On the evening of Thursday May 14, 2015 the club was hit with an isolated storm that left some substantial damage along with a  big mess in it's wake. Our GBGC weather station measured 3" of precipitation, 2" of which fell between 5:30 PM and 6:30 PM. The precipitation came in the form of rain and hail which loaded up on the library patio cover and collapsed it. On the golf course all of the sand traps were washed out in which the liner on the faces of the traps was compromised washing the underlying soil into the bunkers contaminating the sand. Additionally all 6 acres of  recently refreshed walnut shells washed out onto the golf course and the lower cart barn flooded requiring some 30 golf carts electric component's be removed, dried out and replaced. 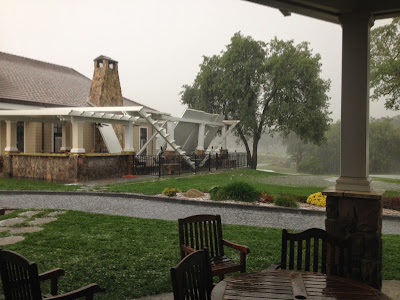 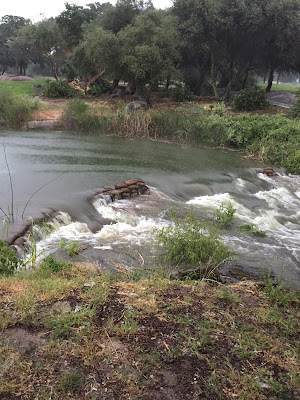 Cleanup efforts took 5 days. The dirt and silt that washed into the traps had to be removed and remaining sand redistributed. Walnut shells that washed onto the course had to be piled up, removed and replaced in the walnut shell areas then subsequently raked smooth. There was a net loss of sand from the traps and shells from the walnut shell areas as a result of the storm and during cleanup. We have some shells stockpiled but walnut shells are not available this time of year so we will refresh with what was recovered and stockpiled. We had a planned refreshing in the sand of the sand traps and luckily did not start that process before the storm. Over the next couple of weeks we will start to add a little sand to all of the sand traps. The traps don't need allot of sand but a little refreshing and redistribution will help with consistency and should whiten them up a little. 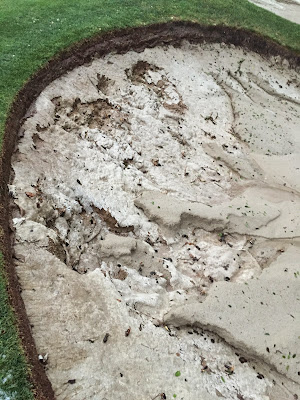 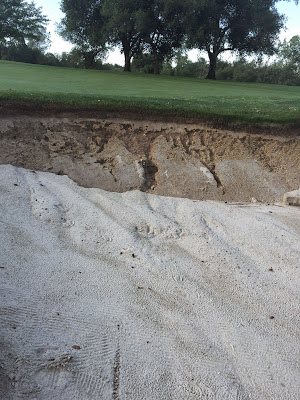 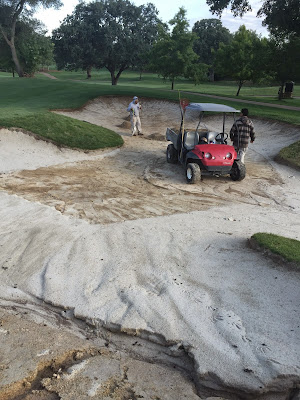 Above are examples of liner on the faces of our sand traps that were compromised by the flash storm we experienced. These faces will need to be re-lined to prevent future contamination when storms occur. Picture directly above is our GCM crew removing the washed decomposed gravel (DG) that washed into the trap during the storm. Most of the DG fortunately settles on top of the sand allowing for its tedious removal. 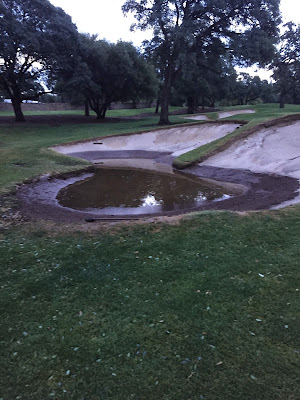 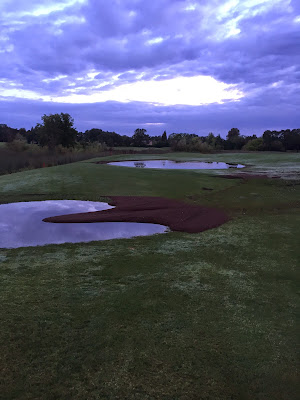 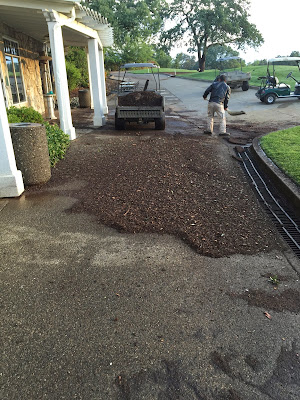 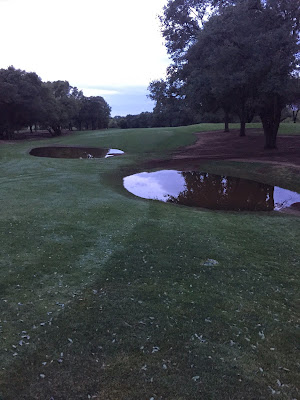 The extent of the walnut shell washout was a new wrinkle in storm cleanup for us. Not a hard   equation  to figure out.                  Newly refreshed shells + 2" of rain in an hour = Big Mess
Posted by Matt Dillon - Golf Course Superintendent at 8:46 PM No comments: