The seeding process of our primary rough with Tall Fescue is going well as we have completed most of the front nine this week, 9/26/22 through 9/30/22. We also conducted our bi-weekly bunker maintenance this week which takes allot of man-hours that will next week be shifted to rough seeding which will allow us to finish over 90% of all the primary rough by weeks end.

We Need To Keep Cart Traffic on Fairway's Only, Not in the Rough.

I wrote a course update in April about carts return to the golf course describing entering and exiting through gates and not driving in the rough. I can tell by traffic patterns that the gates are used by the majority of cart's to enter and exit fairways, but I  can also tell that golf cart traffic in the rough is common place. Driving in the rough on these newly seeded holes can compromise germination and establishment, as well as potentially migrating some seed into our hybrid bermuda fairways, which we definitely dont want. Driving in the rough simply cannot happen in the month of October while this new seed establishes.

We have invested allot of sweat and treasure into this golf course to give us a chance at surviving summers, and have a product that is both  sustainable and something we can all be proud of. The 2021 renovation was the move that made this possible. These subsequent moves of establishing more durable Tall Fescue in the rough and future moves of installing supplemental  irrigation to keep the fescue thriving in the summer will bring us even closer to this goal. I truly believe...

The Best is Yet to Come! Thank You for Your Support and Patience.

Posted by Matt Dillon - Golf Course Superintendent at 11:07 AM No comments:

It was about a year ago, we re-opened the golf course  after going through a major renovation converting fairways to Santa Anna Hybrid Bermuda, re-surfacing all putting greens and adding a few more, and  re-shaping all of the bunkers. In fact, at this time last year we were still not open to our members and still under construction. And when we did open in early October, we opened to cart path only and a golf course that was in various phases of growing in.

A big part of the renovation was converting our fairways from cool season turf to warm season Santa Anna Hybrid Bermuda. The rough and new turf around new bunkers remained cool season turf. The primary rough areas were pretty wore out from the construction processes and were in the process of being seeded with Tall Fescue, a durable cool season variety of turf which is the same turf we used around the new bunkers during the renovation.

We had allot of loose ends on many different levels to tie up after the whole renovation process, and re-establishing rough with the aforementioned Tall Fescue was just one of them. Fortunately the cooler weather of fall arrived, and all of the seed we put down germinated and established, but we never had the time to properly prepare the seedbed for wide scale, long lasting success. Never the less, the durability of the Tall Fescue began to establish itself and grass plants from last years seeding are still present today despite another summer of hardship for cool season turf throughout the region.

Another  reminder is during renovation we chose not to convert our rough to warm season hybrid bermuda like the fairways because hybrid bermuda does not do well in shady conditions. And the trees and associated shade on our Parkland Style Golf Course, hybrid bermuda would not be the right choice of turf in those areas.

This brings us to today and the seeding once again of our primary rough areas with Tall Fescue. We just took the last two weeks and core aerated all of the primary rough on the golf course in preparation of seeding the rough with more Tall Fescue. This seeding process is starting this week on 9/27/22 and will go through the first week, maybe second week of October. We will update with many specifics the process's we will be undertaking as we proceed, but I wanted to bullet point  some main concepts for us all to understand.

1. We need to keep the fescue seed out of the fairways.

2. In order to achieve this we will have to restrict carts to paths only on the holes we are working on which will be more restrictions at any given time then the last two weeks when we were aerating the rough. Cart path only holes will be plainly marked with cart path only signs.

3. Once we open a newly seeded hole to cart traffic, it will be important to enter and exit holes through the gates and drive carts in the fairway only.

I'm confident once we get the seed covered with topdressing as well as worked  into the soil with irrigation, the seed will not migrate into the fairways. Keeping rough areas moist while the seed germinates will be another issue we will have to face  as without adequate moisture the seed cannot swell, germinate and establish.

The timing and our ability to focus on seeding rough aside from normal course setup should elevate our seeding efforts  this year over last. Another reminder however is our renovation converted approximately half of our course to warm season turf that can handle our summers. The other half, the rough, is still cool season turf that will need to survive next summer, and summer is coming. That's why we are promoting Tall Fescue and its's better summer durability and tolerance to other cool season varieties as well as our plan to start adding supplemental irrigation to these rough areas. Our goal is to give us the ability independently irrigate our cool season rough apart from our warm season fairways which should put us in a good spot for all of our turf  to survive summers of the future.

The Best Is Yet To Come! Thanks for your Support & Patience

Posted by Matt Dillon - Golf Course Superintendent at 9:30 AM No comments:

Email ThisBlogThis!Share to TwitterShare to FacebookShare to Pinterest
Labels: Aeration, Overseeding, The Project 2021

Early this week we received some rainfall that is always welcomed in September, but untimely for our aeration operation as dry conditions are essential for the clean-up process. It rained here at the course all morning on Monday 9/19/22 making conditions to wet to start the back nine  process through Tuesday 9/20/22. Then just when we finished the actual aeration process on holes #'s 10 & 12 on Wednesday 9/21/22, an unexpected two hour steady rain made the aeration cores way to wet to process. We will have to wait until tomorrow afternoon to clean them up as well as adjust our plan to stay on track to start seeding rough next week on 9/27/22. Below is our revised plan to get the rough aeration completed. 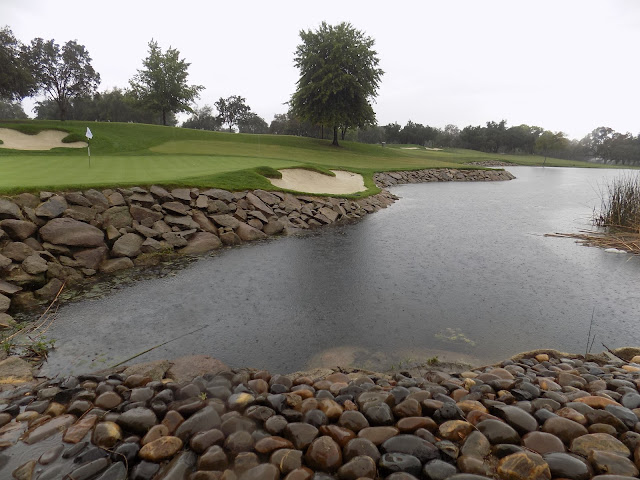 Even a light rain, like what we received, makes it impossible to clean up the cores.

Email ThisBlogThis!Share to TwitterShare to FacebookShare to Pinterest
Labels: Aeration

We started the recovery process for our rough this week with an aggressive core aeration. Turfgrass aeration is the dreaded but necessary process of punching a hole and sometimes extracting a core consisting of thatch and soil, thus providing passage ways for water and air to the soil and roots of the turf grass surface.  We are planning on core aerating all of the rough on the front nine this week and the back nine next week. Afterwards, the week of 9/26/22, we plan to start seeding the rough we just aerified.

The process of core aerifying large turf areas like our rough involves using a large Toro Procore 1298 aerifier that penetrates down into the turf area and either punches a simple hole or extracts a core depending on the tine that is used and what we are trying to achieve. Typically core aeration is more aggressive procedure that has the added benefit of removing excessive organic matter from the soil profile. Core aeration for golf course turf requires a lot of clean-up as we need to process and remove the extracted cores which requires dry conditions to do so. Therefore, we typically aerify in the early AM and start cleaning up in the afternoon after some drying has taken place.  Pictures below will tell the story better than I can for those who are interested.

So far so good with the entire process through Wednesday 9/14 as we have had no equipment issues or setbacks and have stayed on schedule. Assuming this momentum continues we will proceed with the below schedule for next week. Thanks for bearing with the process.

Email ThisBlogThis!Share to TwitterShare to FacebookShare to Pinterest
Labels: Aeration

The Fall Equinox is only two weeks away, marking the astrological end of summer and where nighttime and daytime hours are equal in length. Granite Bay Golf Course Maintenance will look at this date a little less passionately this year as our new Santa Anna Hybrid Bermuda fairways will miss the warmth of summer, but our primarily cool season blend of turf in the rough and around the bunkers will indeed welcome the change.

Currently we are in the tail end of an historic heatwave and we are not experiencing  the devastating turf losses this property has endured over past summers. It is a nice position to be in.   The rough has taken a hit and some spots in step collars will need some re-sodding when things cool off, but all in all we have a  golf course that is alive and very playable. 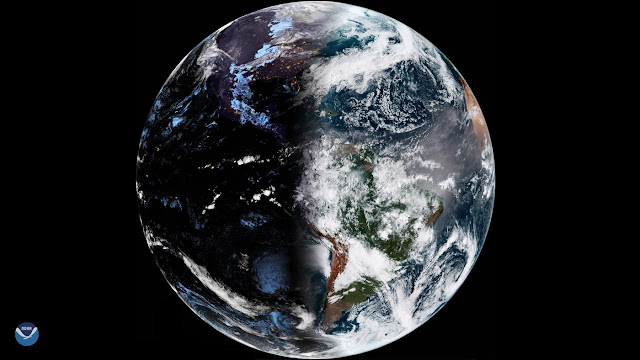 Fall is a great time to year to recover and grow cool season turf and to germinate seed. Therefore beginning next week on Tuesday 9/13/22, we will start to aggressively aerify the rough on the golf course in preparation for aggressive interseeding with Tall Fescue.
Last fall we were opening the golf course after our 2021 renovation and were embroiled in a myriad of tasks left behind in the wake of the renovation and recovering the rough was just one of those tasks. This year, for maybe the first time ever, we will be able to focus much of our fall renovation efforts on the rough aeration and seeding since our cultivation on the new fairways is done until next year. We plan to get aggressive with the rough aeration to facilitate some much needed recovery.
Rough Aeration Schedule For Next Week
Tuesday 9/13/22 - Holes 1-2     Back 9 Start
Wednesday 9/14/22 - Holes 4-5     Back 9 Start
Thursday 9/15/22 - Holes 8-9     Back 9 Start
Friday 9/16/22 - Holes 6-7     Back 9 Start
During the rough aeration process we will close the holes to cart traffic we are working on. We will communicate our progress through the Golf Shop daily e-mail and post adequate signs along cart path's regarding the cart restrictions. I will post another Course Update next week with an updated rough aeration schedule for the back nine based on progress at that time, as well as our plan for seeding the newly aerated rough,  which will require some nuanced cart restrictions to keep seed in the rough and out of the new Santa Anna Fairways.
Thank you in advance for understanding the necessity of this work and co-existing  around these messy and loud non-routine maintenance practices. The only other option would be to close the golf course, and we dont want to do that.

Fall is a great time of year, and substantially less stressful this year as we have much less recovery then what we have had to endure in seasons past. It will still be busy, as cooler weather and ending vacations will bring members back to the club. We in golf course maintenance are looking forward to getting the rough back to good and starting further irrigation improvements at the end of the year to help us hold onto more of this cool season rough before next summer. Much still to do, but .........
The Best Is Yet To Come
Posted by Matt Dillon - Golf Course Superintendent at 3:29 PM No comments: