Yesterday on Monday 3/27/17, even though it was much wetter then ideal for fairway aeration we rolled the dice and went ahead and got started on a few fairways on the back nine. The new Toro ProCore FW Aerator we purchased a few years ago does a great job even when conditions are a little wet, but as we have covered before the trick with this process is getting dry enough conditions to effectively remove the extracted cores.

We did receive over 2" of rain last week and 1/4" of rain on Sunday night. This does make conditions a little iffy for aeration of 25 acres of fairways. However we were closed on Monday and it is pretty hard to let an opportunity like that go to waste, so we went ahead and got started. We ended up removing cores with a piece of equipment called a Core Harvester which is the machine we use to remove cores on the greens. I've used the Core Harvester on fairways before at a previous property but never here at GBGC. The positives of using the Core Harvester for cores on a Fairways is you don't have to let cores dry and can start removing them immediately after extraction. The negatives are the machine is very slow and picking up fairway cores are very hard on the machine itself. 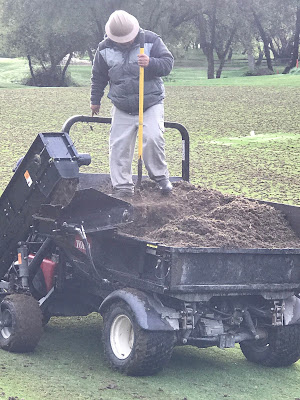 But the decision proved productive as we have a good jump on Fairway Aeration and dry weather in the forecast for the next few days. As long as everything goes according to plan, we will have all fairways core aerated and most of the sand topdressing out by the end of the week. Below is the Aeration schedule for the week outlining specific pre-scheduled alternating F9 / B9 closures. Additionally below is the updated rainfall accumulation for 2017 which is not the most ever but the most we have received in a long time. 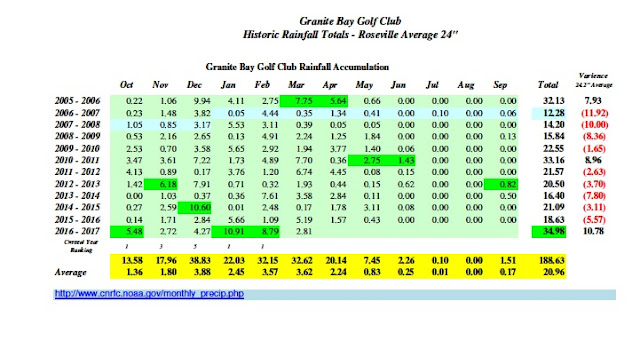 Posted by Matt Dillon - Golf Course Superintendent at 6:59 AM No comments:

In the two previous course updates we chronicled changing our previously scheduled greens aerification from Tuesday 3/21/17 to Monday 3/20/17 due to wet weather forecasted  for the aerification day. We started The Greens Aerification Process around 5:00 AM and finished 1-18 regulation greens as well as the chipping green and both practice putting greens by 3:30 PM. Moving the date seemed almost providential because not only did it start to rain shortly after we completed the process, we literally had no issues with damage, or equipment or man-power. I've never experienced such a smooth process, here at GBGC nor anywhere else, and there is allot of equipment and moving parts involved. Thanks to our entire maintenance staff and in particular, Kevin Schumann our Equipment Manager who made sure everything was working tip top.

As I mentioned above it literally started raining when we finished and continued to rain off and on for the next two days ( Tuesday and Wednesday) and nights giving us a total of 1.70" of rain. This is extremely good for the greens after aerification as it helps work the sand into the holes and draws oxygen deep into the green soil profile. The down side to the wet weather is we cannot what I call "tweak" the greens by spot sanding & brushing areas that have settled as it is imperative that this is done in dry weather. Today is nice and as I am writing this correspondence to you, the crew is out working amongst some of you and rolling, lightly sanding and brushing to make sure all of the holes are filled. This again is being done right ahead of another rainstorm later tonight ( Thursday ) and into tomorrow ( Friday ). Perfect.

We have been able to time rain events with the greens aerification this time around but I suspect the fairways will be too wet to core aerify next week on our planned alternating F9 / B9 closure days scheduled for Tuesday 3/28/17 through Friday 3/31/17. We will wait and see what nature brings us as far as rain is concerned the next few days and make and communicate our decision by Saturday or Sunday. If we are not able to go on the planned dates we will re-evaluate our process doing something that will not require F9 / B9 closures. More to come.

The below chart indicate's a change from this AM in the weather forecast. This Accuweather forecast now is in alignment with the Weather Channel forecast giving us some added confidence to confirm the above Monday 3/20/17 putting surface aerification date. It took more then the weather forecast to change to get this done. Mr. Peabody had to get clearance to reschedule an already scheduled tournament on Monday 3/20/17 and move  them to another club. It took some doing but he found another sister club in the area and hopefully everyone will be happy. Always looking out for the big picture which is our GBGC Members, Michael comes through again. 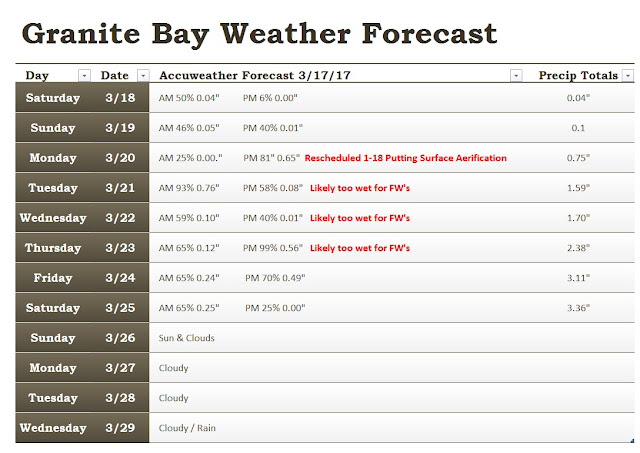 Getting the  regulation greens aerified  and on the path to healing is our main goal next week. If the amount of forecasted rain materializes, and that is a big if, we will not be able to aerify fairways. We will communicate what is going on with the Fairways as soon as we know.

Thanks for your patience and Thanks Mike!

We changed our start date for spring aerification a few years back from early April to late March with the idea that we would be recovered and in good shape earlier in the golf season. The last few years were much drier then this year so the calendar change worked out well. Currently this year is looking like a different story with wet weather forecasted for the upcoming week, Monday 3/20 through Friday 3/24. 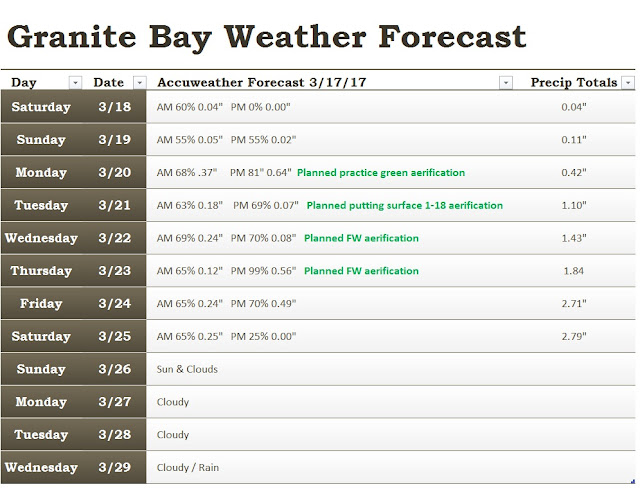 As you can see the above forecast from this mornings Accuweather report, we have rain coming on the dates we slated for aerification. Why is this important? Because this kind of work cannot be done when it is raining or even too wet. Trust me we have tried, and we end up making more of a mess and damaging the very turf we are trying to improve with aerification when we try to do it in the rain or overly wet conditions.

We are ready to go and will be watching weather and forecasts closely and if we feel we can proceed with out causing damage we will do so. There has been a slight change in this forecast from yesterday to today calling for less rainfall on Tuesday and more Monday night. Tuesday is when we are scheduled to do greens which are a little more conducive to aerifying when everything else is wet because of their high sand content but it is still iffy with over 1/2" forecasted for Monday evening. It really depends on when that 1/2"+ falls.

We are leaning towards postponing all aerification practices until the week of Monday March 27th. If we can get the greens done on Tuesday 3/22/17 as planned we will as we will get another week of recovery which is advantageous to the big picture. If its too wet we will postpone greens until Monday 3/27/17. If it is dry enough we will aerify fairways the following Tuesday 3/28/17 through Thursday 3/30/17 with alternating F9 / B9 closures on those days. If it is too wet to aerify fairways during that time frame we will reevaluate our process and timing.

Below are current images of where we are at with rainfall totals, CA reservoir levels and snow accumulation. We are in pretty good shape for 2017 so I wont be writing too much about drought, however as I have stated before water and water use are obviously important to golf course turf and will, I believe, the defining issue in CA golf moving forward.

Posted by Matt Dillon - Golf Course Superintendent at 7:35 AM No comments: