As another year comes to an end and as we start looking forward to the next season it always seems fitting to review the progress and setbacks from the previous year. Weather extremes, tree replacement and removal, irrigation system advances, a maintenance yard burglary and substantial driving range improvements drove the largest changes at Granite Bay in 2013.

The rain season for 2013 started in October of the previous year. We got off to a pretty good start with over 14" of rain recorded in November and December of 2012 recorded by our own weather station. Then from January 2013 to September 2013 we recorded only 4.99" of rain. In the 2013 calender year we recorded only 6.39" of rain, by far the lowest accumulation for a calender period in the history of Granite Bay Golf Club. The lack of rain and snow effecting upstream storage in Folsom Lake will be potentially be our challenge for the up coming golf season, but how much  remains to be seen. If something doesn't change soon such as a big series of storms producing both rain and snow, lack of irrigation water could be the golf course maintenance topic of 2014.

Although 2013 was dominated by temperate & dry weather, we did have our share of extremes. For the year we had 15 days of freezing temperatures and frost delays and conversely 12 days of temperatures of over 102 degrees. One extremely rough period was between June 29th and July 5th where we experienced 7 days over 102 degrees with 5 of those days over 105 degrees. This is the period when #3 green struggled again. Temperature extremes are not unusual but the 5 days over 105 degrees and the 6.39" of measured rain for 2013 are historic numbers which could have ramifications yet to be played out.

One overdue and needed 2013 project that is scheduled to start this coming week on Monday 12/30/13 is cart parking expansion near Tilleys. The plan is to slightly cut into the bank adjacent to the #9 green along with some widening on the other side of the path, re-grading and replacing the concrete providing for diagonal parking on both sides of the area as opposed to the free for all parallel parking scheme currently in place. Timing for the project is as follows. Week of Monday 12/30/13: Removal of  one of the Blue Oak's close to the patio and wedding ceremony area which has been slated by our arborist as necessary for removal because of it's overall  lack of health and danger to the clubhouse. Week of Monday 1/6/13: Concrete removal, grading, forming and pouring of new concrete. Week of Monday 1/13/14: Re- irrigate and sod. Project complete.

Completed capitol projects in 2013 started by replacing all of the ball washers on the course and in doing so replaced the associated trash enclosures with wooden IPE trash enclosures that match the par three divot boxes and  sand bottle enclosures. These IPE accoutrement's were designed and built by 20 year Granite Bay employee partner Kevin Schuman. 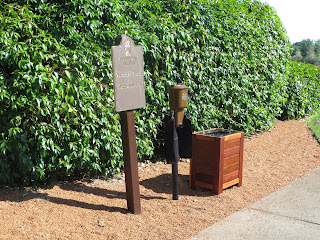 The Granite Bay Teaching Academy was completed in 2013 as well as replacement and extension of the driving range netting protecting the short game area. Netting replacement was completed in conjunction with re-locating the middle target green and bunker on the range providing a better target from the teaching center and to direct general driving range traffic more to the center of the range then to the right.  Any project of this type is not without its controversies but after completion the netting and teaching center building didn't detract as much as predicted and blends well in the surrounding landscape.

Other completed capitol projects for 2013 included pond aeration systems in both ponds on the course and security fencing and alarm system in the GCM yard. Fencing and security were the result of a early in year break-in which we sustained some equipment losses down in the maintenance yard. The pond aeration systems were installed to help with aquatic vegetation accumulation as a result of the eutrophication process that golf course water bodies experience. We did achieve some aquatic vegetation reduction despite the late season installation of the  pond aeration system's and should experience substantially improved season long pond water quality now that we will start off 2014 with the systems in place.

Replacing strategic trees that we have lost throughout the course over the years and proactive replacement of trees that we suspect could be lost in the future was another capitol project we got started on in 2013. Additionally we continued on irrigation coverage enhancements which we had additional capitol funds to draw off of in 2013. A large greens fan to alleviate the unique conditions we experience in the green complex of #3 was purchased in 2013 as a capitol expense as well. This fan will be moved to the area adjacent to #3 green in mid June and remain through August after which it will be removed. All electrical and fan mounts have already been installed.

Capitol funds for 2014 that we plan to spend on the golf course revolve mostly around continued irrigation improvements. Irrigation components such as sprinkler heads and controllers are 20 years old and a replacement program needs to get started. Some of these replacements will result in upgrades and additional features that will help with irrigation coverage, control and  water conservation which is timely and will be a defining issue of the course in the years to come.

The Club has partial responsibility for landscape and sidewalks along Roseville Parkway & Barton Road so capitol funds have been earmarked for asphalt repair and sealing as well as landscape plant replacement. Along with that we have some tee expansion plans and  long overdue drainage work in the driving range that we plan accomplish with capitol funds in 2014.


I'm sure Ive mentioned more then once, realizing I'm stating the obvious, that golf course's are in a constant state of change that begins when the first seed touches the ground. We go from season to season and year to year making plan's, adjusting to the whims of nature, trying to stay ahead of the next issue. The task of shepherding these changes, as much as one can, is much more rewarding when one has support of those whom benefit the most from these efforts. Therefore I know I speak for the entire golf course maintenance department when I say, It continues to be our pleasure to serve the Membership here at Granite Bay. Thank you for your years of continued support of these efforts.