We will be doing something a little different this year with course setup for the  Club Championship starting tomorrow Friday 10/18/19 through the weekend and wanted to address those differences here to help with potential confusion.


We will be playing preferred lies in the fairways as there is still seed germinating in some areas and we can't completely turn off the irrigation. Additionally we will be painting hazards as usual and double cutting and rolling greens which is customary as well. The big difference is we will be using yellow flags on the pins throughout the course all three days.  Since not everyone playing  over the next three days will be competing in the Club Championship we wanted to give you a heads up and post the pin sheets here. Below are the pin sheets that will be handed out to both competitors and non competitors throughout the weekend.

Good Luck To All Competitors 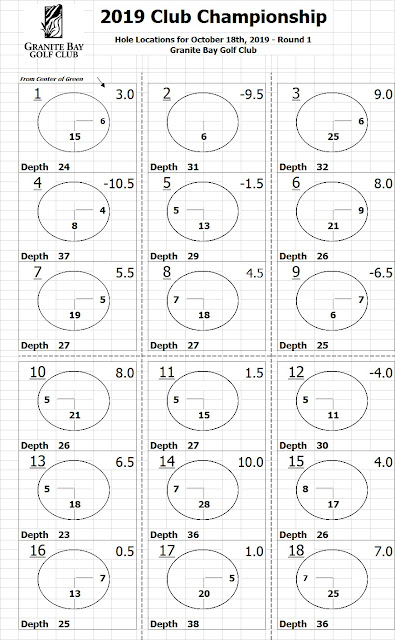 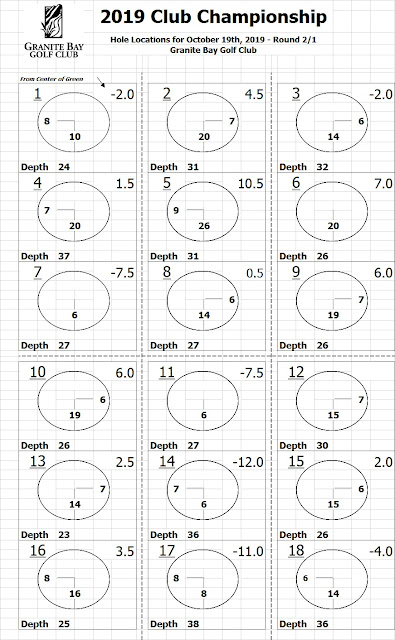 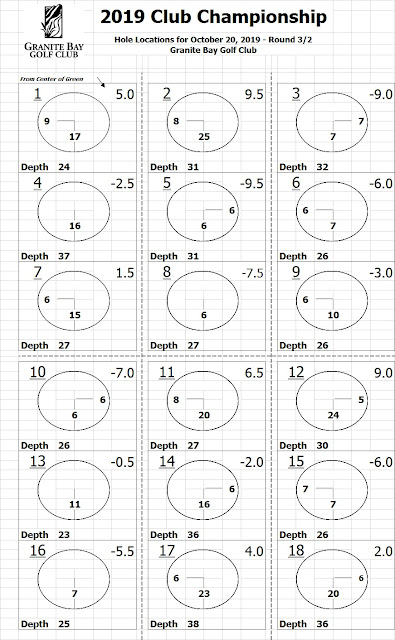 Last Monday September 23 was the Autumnal Equinox signifying the beginning of fall in the northern hemisphere. For those who are interested check out this cool video from National Geographic depicting these celestial movements as only  National Geographic can. 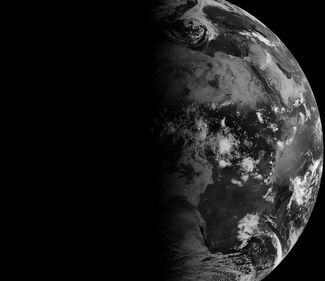 This is the date that we have always circled on our maintenance calendar as "The Day" that everything turns around from our customary summer setbacks with our cool season turf. Welcome weather relief is still the case as the vast majority of playing surfaces at Granite Bay are still cool season turf. However the first phase of our turf conversion from cool season to warm season hybrid bermuda which began in 2019 with green surrounds and #17 fairway have us a little torn. We need the cool nights and short days to recover and germinate ryegrass seed for the cool season surfaces but also welcome continued warm weather that will help further establishment our new warm season hybrid bermuda sod.

Cool season recovery is under way and in a very short period of time all imperfections will be filled in with perennial ryegrass. Lots of seed has been seeded into the playing surfaces, covered with sand and compost and fertilized and is germinating as we speak. But again on the other hand the new warm season turf in the surrounds and #17 fairway have slowed down.

We need to remember the conversion to warm season turf takes time. It has to be established in the summer months because that is when it is actively growing. We put down the first batch of sod only 8 weeks ago and shortly afterwards started to experience an cooler then normal fall in late September. We have plans to mitigate color as the new Santa Anna creeps into dormancy but the hybrid bermuda will slow down to a crawl as far as growth is concerned. The texture inconsistencies we currently experiencing primarily in the surrounds will be a temporary condition that we will have to work through this fall and upcoming winter. Next year, after its first full year of establishment  these inconsistencies will be a thing of the past.

We still have tee over seeding to get done and will be working on this starting next Monday. We will get the driving range tee aerated and overseeded so it will be closed for four weeks  until Jones Cup weekend. Additionally we still have to aerify the upper practice green and Tilleys. We are going to do something different to the PG's rather then traditional core aeration which will be virtually unobtrusive yet very effective. The process is called  Dryject and is one of may new aeration strategies that we will be looking at for the future particularly with a potential re-surfacing of our putting surfaces in 2020. Dryject utilizes high pressure water to inject sand deeply into the putting surface. After a quick brushing and rolling the surface will perform as if nothing were done and the injection holes evident in the pictures above will recover within days. Look for some GBGC pictures and an update following Mondays procedure. Below are a few more internet pictures. 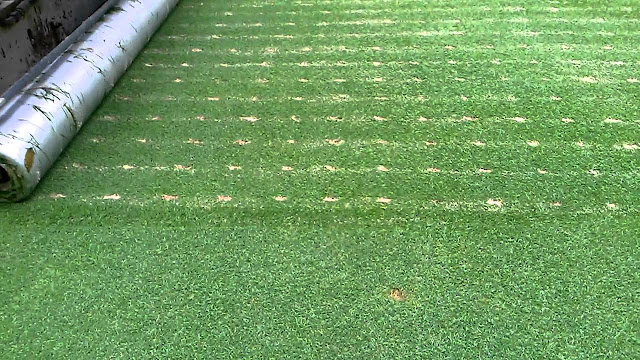 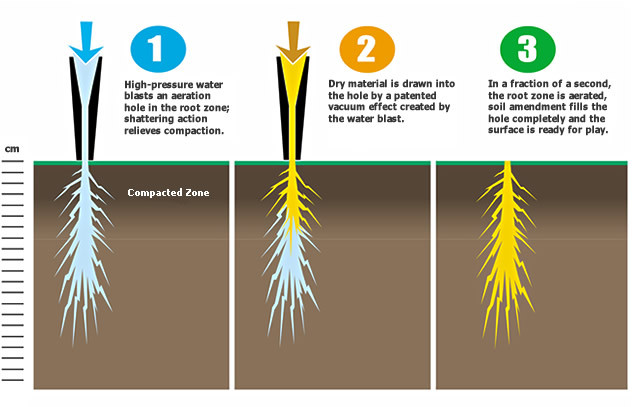