Golf courses such as Granite Bay with predominately cool season turf inevitably will have issues in the summer months. Not all summers are the same and 2013 will go down as a warm one to be sure. Thankfully the delta breezes have surrounded the heatwaves and kept things bearable. However starting Saturday 6/29 we experienced 7 days over 102 degrees and from Monday 7/2 we never recorded highs below 105 degrees with low temperatures in the 70's.

Unfortunately this heatwave in late June and early July took it toll on our precarious #3 green. If I knew the absolute cause of this greens seasonal troubles and hence the remedy to fix it once and for all I would have recommended the solution and we would have done it. I can tell you what we know resulting from soil testing both physical and chemical along with pathology (disease) testing along with all of the options we are looking at moving forward to solve this greens chronic summer decline.

The heat heat of course was the impetus for decline but why always this green? It has been a indicator green for disease in the past but I did not suspect disease based on the knowledge of the disease prevention we had in place prior to the heatwave on all of the greens. That being said after the greens decline we sent a pathology sample to a lab to either confirm or rule out a disease infection. pathology report did come back positive for a disease called Take All Patch. We naturally treated for the disease because of the positive diagnosis however this disease is normally associated with new bentgrass greens in cooler weather with a high soil Ph none of which was the case for our #3 green. 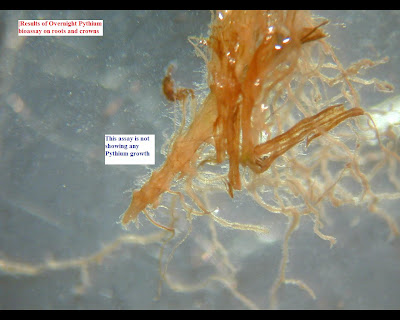 We do annual soil testing to determine where we are at with soil chemistry. In conjunction with the pathology testing we  did after our issues on #3  we opted to do some more extensive soil testing on not only #3 but #14 and #7 which also incurred some stress during the heatwave. This testing included site specific saturated paste testing which reports what elements are available in the soil to the plants at that time. The saturated paste test indicated, that despite having adequate calcium in the soil determined by standard soil testing, the available calcium in solution is currently low.

Our situation with water here at Granite Bay is enviable. It cost's us allot less then many courses in our geographical area and substantially less then course nation wide. Our water originates as snow melt from the Sierras and is void of many of the salts and minerals that are present in much of the ground water in the Sacramento region. Its problem is that it is too clean which believe it or not prevents it from infiltrating as well as water that has some sodium or calcium in it.

".....Green #3’s 2nd tier infiltration rate at 42.69 in./hr. and air porosity of 27.85 percent
shows the potential of the underlying root zone mix; unfortunately the 3rd tier infiltration rate at
only 6.92 in./hr. despite a similar OM content & particle distribution highlights the impact of the
ultra pure irrigation water. Treatment of the water and/or soil amendments that emphasize the
replenishment of calcium, bicarbonates, carbonates, salts, etc. will continue to play a key role in
managing the impact of the water." (ISTRC system report GBGC 10/10/12)
We have injected various compounds into the irrigation system keeping our water condition in mind with varying successes. Injecting fertility compounds into the irrigation water have helped supply nutrients to the turf and helped the irrigation water penetrate better but side effects such as the staining of non-turf surfaces and excessive growth has caused us to look at other options such as injecting gypsum as a calcium source

The location of #3 green is unique to others at Granite Bay. Air movement is limited in the area particularly during high pressure weather systems. This is something that is shared to a lesser extent with #7 and #14.

The third green easily drys out and  easily gets wet. And when it gets wet it stays wet. Probably a combination of its capacity to drain and limited air movement. During the heat wave it started showing drought stress on the slope in the middle of the green which we of course remedied by watering. The green then got wet, it got really hot, we reacted to the high canopy temperatures by slightly cooling down the green with light applications of water which even though they were light, added to soil moisture and we are right back to where we land most summers with this green.

So what do we do from here? 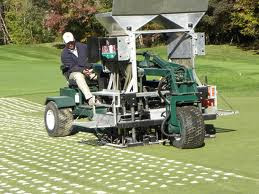 For those of us who take care of Granite Bay this is a very difficult thing to keep going through. We want more then anything to provide the playing conditions our Members want and deserve. We feel progress has been made but overshadowed by the issues on these greens to some extent or another every summer.

Posted by Matt Dillon - Golf Course Superintendent at 9:26 AM