We are currently in the early stages of inter seeding new varieties of Bentgrass seed into our greens here at Granite Bay. Everyone is probably aware that our greens are made up of varying percentages of different kinds of grasses. They were originally planted with Creeping Bentgrass and over the years have been infiltrated with Poa Annua (poa - sounds like Boa Constrictor). This infestation is a common evolution of a putting green in Northern California, particularly greens that are 20 years old as there are no 100% effective products to keep the poa out. 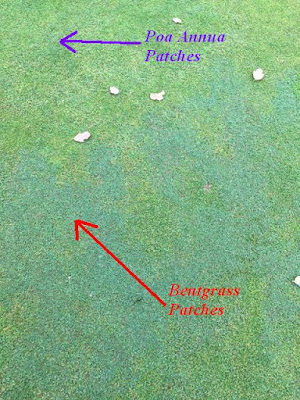 There are multiple problems with poa infiltrating putting surfaces particularly during the transitioning process from bent to poa. First, all poa is not the same. When cut at putting green height, poa annua develops a tremendous amount of seed which remains viable in the soil even if it doesn't germinate right away. When it does germinate it starts cross pollinate and produce different bio types. Bio types with deeper rooting and finer texture (dark - green poa) are certainly more desirable then the bio types that have shallow roots (yellow-green poa) making the plant very susceptible to summer stress. 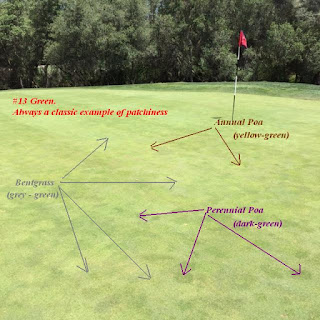 Another inherent problem with poa is it ability to coexist with the deeper rooting bentgrass.  What typically happens as poa populations increase is you start to irrigate more frequently to protect the poa and  bentgrass roots become shallower because of the more available water near the surface. At this point it is difficult to "dry down" a green that has a substantial poa population  because of poa's shallow root depth   Drier greens are firmer and by default faster and smoother with out having to do anything else. Many areas in Norther CA have 100% poa greens that perform well primarily because they are old and the more desirable bio types have dominated over time and have eliminated the less desirable ones. However that type of consistent performance has been elusive here at Granite Bay as this "transitioning" is still in process and we have to putt over varying bentgrass patches and poa annua biotype patches.

Recently David Dube, a regional director of Agronomy for Club Corp visited the property and we toured the course and looked at all of the greens. His opinion was we needed to start getting newer varieties of bentgrass seed intermixed into our greens and at much higher rates and implement these seeding events more frequently then we have been accustomed to.  The reason for the frequency and higher rates is, it is difficult to get an new grass plant established in an already dense stand of turf but you can win the battle attrition if you can stay at it. The overall thought is to out compete the poa seed bank with newer bentgrass varieties, all of which were bred specifically to compete against poa annua.

These newer varieties of bentgrass,  primarily because of their shoot density, have shown to be very competitive against poa. They are not quite the creeping type of creeping bentgrass that was seeded on our greens originally. We plan on introducing a few different new varieties into the greens and see what dominates in our particular  micro climate's. The varieties are Dominator and T1. Dominator is a blend of Tyhee and 007 and T1 is a stand alone variety. I'm not concerned about multiple varieties of bentgrass because that is exactly what we have now. My main concern is the individual varieties ability to crowd out and compete against poa annua creating a stand of deeper rooting fine textured grass that can be dried down.

The inter seeding process itself is a little tricky because we still need to provide an acceptable putting surface. Timing is crucial as well. The summer months provide  the best opportunity to compete against poa because the long days and heat naturally slow down poa and make it less competitive. Conversely the heat can be hard on young bentgrass seedlings so the surfaces need to be kept moist but not too wet.

Recently we spiked and vertical mowed the greens and followed this process up with a heavy seeding of Dominator which was brushed into the turf canopy and spiking holes. All of this was followed by a light topdressing of sand. We will have to forgo applications of growth regulators, which we apply on a fairly regular basis, as these types of chemistry's can be hard on young seedlings. Our goal is to make this process as seamless as possible maintaining putting quality to an acceptable level throughout, because one seeding will not be enough. We will have to repeat the above mentioned process on many occasions throughout this year and the next if we have any hope of out competing the poa annua.

One future addition to our equipment arsenal that I hope will help with our conversion efforts is a seeder attachment that was designed for just this process. The video below depicts the operation which is advantageous on several  different levels. First using a a seeder like the Maredo will cause no surface disruption and can be operated by one person. Secondly, because of the precise placement of the seed into the green, we can expect higher germination rates at much lower seeding rates compared to broadcast spreading of the seed. This is extremely beneficial in that these new bentgrass varieties run any where between $10.00 and $13.00 per pound so if we can get more viable plants using less seed we can repeat the process more often increasing our odds for success.

What I am hoping to see is further increases in our bentgrass population and particularly more of a blending of the bent and desirable poa species. A total conversion of new bentgrass varieties is likely to much to expect, however over time if we keep at it who knows. Again deeper bentgrass roots and increased root mass overall means we can water less frequently creating a firmer surface by default. A firmer, drier surface will provide more consistent performance.

As seamless as we hope to make this process it wont be totally painless. There will be times that we need to raise the height of cut on the greens to allow for new bentgrass proliferation. There will be times we have to delay growth regulator applications and add a little more fertility as well which will effect putting consistency. However you will know successes are being made if the greens seem firmer under foot and ball marks are becoming less of an issue. These attributes are examples of an improving root system.


All of this comes at a cost which Club Corp is totally behind especially if we can head off a costly and excruciatingly painful and  inconvenient re-surfacing project. We are seeing increased bentgrass populations already primarily due to some adjustments we have made with fertility & plant bio-stimulator's and  we are experiencing firmer conditions due to consistently light sand topdressing the greens on a weekly basis this year. We are just starting to see germination of new bentgrass varieties from the seeding's we have done thus far, all of course the newer varieties that compete much better with poa.  Based on these results I am optimistic we are heading in the right direction.
Posted by Matt Dillon - Golf Course Superintendent at 2:01 PM