Twenty two days from today is the beginning of fall marked by an equal amount of daylight and nighttime. We have mentioned many times that this is the time of the year that the cool season turf at Granite Bay thrives and the time that corresponds with the  turf cultivation practices of aerification, de-thatching, inter-seeding and overseeding.  Aerification is when we poke a hole in the turf and remove a small core of grass, thatch and soil. De-thatching is when we run over the turf with machines that have verticle blades that cut a line in the turf removing excess thatch. Inter-seeding is the process of introducing seed into the turfgrass stand using a variety of techniques and methods with the goal of thickening up an areas of turf that have thinned out during the summer season. We will address the specifics of each of these procedures closer to their starting dates but since Overseeding Tees is starting next week we can address some of those details now. 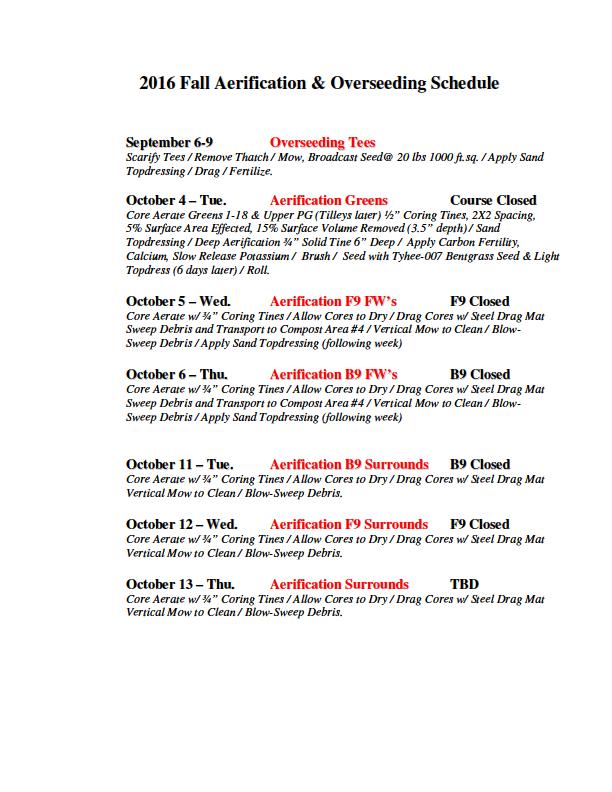 Overseeding is a little different then interseeding. Overseeding is typically done in the late summer early fall to a warm season turf surface such as bermuda to keep it playable during the cooler winter months when the bermuda usually goes straw brown dormant. The tees at Granite Bay are hybrid bermuda which is very durable in the summer months but needs to be over-seeded for winter or they will be brown and more importantly susceptible to wear. Timing on overseeding is important. You need some warm weather to get the seed to germinate quickly but no too hot jeopardizing germination. We consistently start overseeding the tees right after Labor Day which will be next Tuesday 9/6/16. We do not need any course closures or alternating F9 / B9 closures for overseeding tees as we can move tee markers to different levels and work around member play. Below are some pictures of the process.

Timing for overseeding this year will be perfect as our Club Championship will be played two weeks after overseeding. This will give the seed plenty of time to germinate and the tees to be in good shape for the Championship

Posted by Matt Dillon - Golf Course Superintendent at 7:29 AM