The Bunkers at Granite Bay Golf Club represent a significant portion of our course renovation project.  The current bunkers drainage system, liner and sand are over 13 years old and have more than reached their estimated lifespan.  They were constructed with what was at the time the best available technology, sand over a hard non-permeable polymer lining with an underlying drainage system. Over time this liner has failed allowing soil particles to mix with sand particles after winter storms, substantially slowing down the sands ability to drain which is the beginning of the end.  Some problems were the erosion of the faces and pooled water after rain storms.
In addition to providing poor playing conditions the bunkers required hours of maintenance work to repair them after a storm.
Since our bunkers were last renovated a new system, the Better Billy Bunker system, was devised.  Similar systems are used by virtually every high end course in the world and they create a water-permeable base for the entire bunker, while also helping hold sand to steep faces.  This system can allow up to 1,500 inches of water per hour to pass through the base.  One course in Virginia had hurricane Sandy drop 7 inches of water on its 120 bunkers.  Their crews completed their normal raking maintenance, and then spent a total of 1 extra man-hour cleaning up washed sand in the bunkers. There were just a few rivulets to be smoothed out, with a leaf rake. Previously this would have taken an additional 200+ hours of work.

So how is this magic accomplished?  This simplified image (from Dormie Network) illustrates the system. 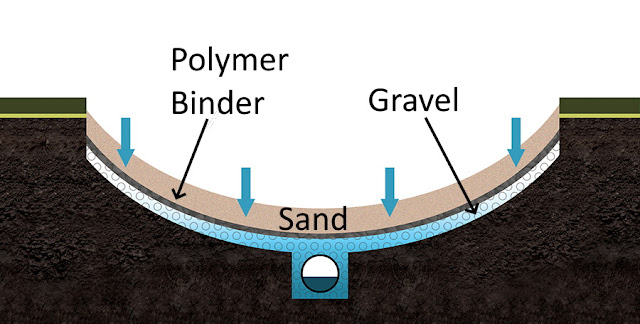 The blue represents water which passes through the bunker sand and a porous layer of gravel into a drainage line at the bottom of the bunker, which transports the water away.

Steps to create these bunkers

After the bunker has been shaped, which in our case has been no small undertaking, drainage lines are installed allowing for 2 inches of gravel and 4 inches of sand.

Then 2 inches of gravel are spread

Then a polymer binder is applied. This results in a sturdy pliable layer of glued gravel which allows water to pass through making the entire floor of the bunker, including the slopes, a permeable drainage field

The final step is sand installation and the finished bunker is revealed.

Email ThisBlogThis!Share to TwitterShare to FacebookShare to Pinterest
Labels: Bunker Renovation, The Project 2021