The approaching year end gives us  an opportunity to reflect on the past years successes as well as setbacks and as most years Granite Bay Golf Club can point to some of each. The historic continuing drought was a big part of the golf course maintenance story in 2015, and continues to be the defining issue of the season as we approach years end however not the only thing to look back on.

In April 2015 after 4 years of drought which included one of the the driest years, the warmest year & the year with the lowest measured accumulation of snow, Governor Jerry Brown issued an executive order directing the State Water Resources Control Board (SWRCB) to impose restrictions to achieve a statewide 25% reduction in potable urban water usage through February 28, 2016.

The executive order (EOB-29-15) stated “The Water Board shall impose restrictions to require that commercial, industrial, and institutional properties, such as campuses, golf courses, and cemeteries, immediately implement water efficiency measures to reduce potable water usage in an amount consistent with the reduction targets mandated by Directive 2 of this executive order”. Responding to the Governors Executive Order the SWRCB adopted a conservation regulation which placed each urban water supplier into one of eight tiers which are assigned a conservation standard, ranging between 4% and 36%.

Granite Bay resides in the San Juan Water District (SJWD) service area and was assigned the highest conservation level of 36%  based on residential gallons per capita per day (R-RGPCD). By the end of the year we achieved the 36% reduction from 2013 use in raw water purchased for golf course irrigation and through November our combined potable water meters on the property had reduced 40% from 2013.

Even with the unanimous prognostication's from weather forecasters of a strong El Nino winter to hit the west coast, many doubt it will be enough to end this historic drought. Through December the States reservoirs are filling and more importantly the mountains have above average snow however these reservoirs were so depleted over the last four years that it will take allot of El Nino to fully recover. My suspicion is we are in for another year of mandated reductions which could lead into a new normal particularly with another CA State government mandate "20 X 2020" which requires a 20% reduction from all Californians by the year 2020.

Despite another year of below average rainfall we did experience some drastic weather that changed the landscape here at Granite Bay. On December 12 2014 we experienced a strong storm that brought 4" of rain in two days. A good portion of that rain fell in the early evening of December 12th causing Linda Creek to overflow it's banks and move a large rock that was stabilizing the creek bank near the bridge abutment on #14. The rock moved off the bank down into the creek exposing soil directly near the bridge abutment to further erosion in subsequent storms. 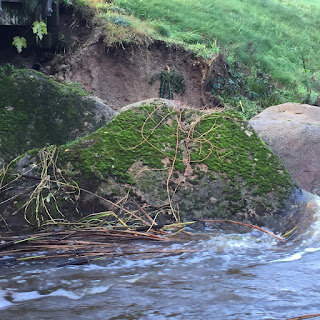 As it turned out we didn't get any more substantial rainfall from January through April 2015 contributing to the continuing Statewide drought. One thing lead to another and we didn't get to properly stabilizing the exposed soil near the bridge abutment with the exception of some temporary old concrete rip rap to protect from El Nino this winter. Our permanent plan is to remove the temporary rip rap once the El Nino threat has past and stabilize the entire creek bank with rock on top and in front of a geo-textile barrier to prevent further erosion issues.

Another destructive weather event occurred in May where a unexpected flash flood went over the course creating a substantial mess and damage. This is the storm that collapsed the library patio cover and washed out our walnut shell areas like we have never experienced in 20 years. We received just under 3" of rain and hail, 2" of which came down in one hour. That's the definition of a frog strangler. 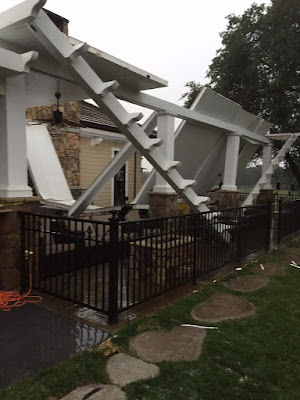 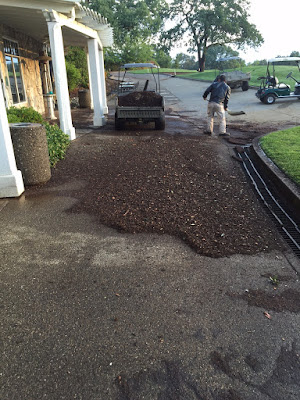 Because of the drought and its associated restrictions we decided against aggressive core aerification of green surrounds and fairways in both the fall of 2014 and spring of 2015 because of the amount of irrigation water it takes to recover from such an event. This calculated omission along with irrigation reductions and a warmer summer helped produce some stressed turf areas throughout the course that we needed to recover from in the fall.

Our corporate Agronomist's visited Granite Bay during this stressful period and concluded if we are going to continue to try to hold onto cool season turf  from July through September we would need to start applying more protection to fairways and green surrounds for disease which is commonly  part of the stress equation in the summer months. This would require more resources which we we able to secure in the way of seed for recovery this past fall and disease prevention products for 2016. 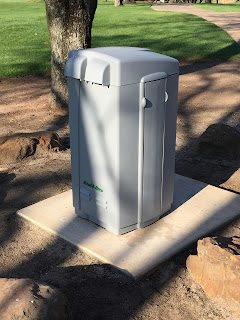 We did adopt some different golf cart traffic control measures in 2015 that we hope moving forward will have a positive effect turf grass conditions particularly in the summer months. First we plan to continue to rope off  different holes in the summer to proactively protect the turf from the damages of cart traffic. In the past we roped along walnut shell lines allowing concentrated cart traffic under the Oak Trees inhabiting the shell areas. This added compaction combined with drought was not the best thing for our Oak trees as outlined in a course update entitled Golf Cart Traffic & Native Oaks. Therefore when we rope off a hole in the future we will no longer follow the walnut shell lines but the cart path to eliminate that concentrated compaction. I hope we all agree a few more steps is worth it to do all we can to protect these assets.

Another traffic control measure we put in place late in 2015 was the use of small white and green stake delineating where to enter and exit the golf hole with your golf cart. We have observed many members adhering to the protocol and this will make a difference in managing the wear and tear of cart traffic. Look for the three small white and green stakes at the beginning of the hole and the same trio closer to the green on and enter from the cart path on the first set and exit to the cart path on the second set. Golf course maintenance will move those stakes throughout the week to distribute wear. Simple as that.

From the entire Golf Course Maintenance Staff we would like to thank you the Granite Bay Members for your support of our efforts in 2015 and throughout the years. The dynamic nature of maintaining a living breathing "game board" presents unique challenges along with opportunities to exceed expectations. That is our goal, and we appreciate your encouragement and recognition of those efforts.

Posted by Matt Dillon - Golf Course Superintendent at 10:09 AM