I think I mentioned last update that we were having issues with white grub infestation throughout the course. Some areas we have observed actual turf damage where the population of grubs ( 20 per ft.sq.) is substantial enough that they chew off most surface roots and the turf dies. Examples of this type of infestation in the very beginning of #15 fairway and the approach to #2 green. We have scouted the course and made spot applications of insecticide to eradicate the nuisance pests however control of the grub at the adult larval stage is difficult. Preventive applications in the spring are much more effective 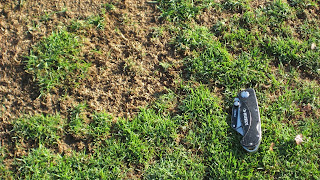 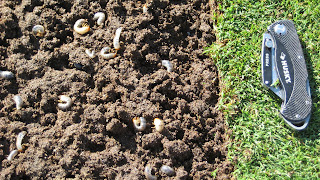 The pictures above show the damage and the actual grubs working beneath the turf in the approach to #2 green in populations enough to actually cause turf damage. After the area was treated the activity slowed way down and the area actually started to recover.
I don’t really know why but accentuated grub activity is widespread in the Sacramento area this year. I know they are a lot more active here at Granite Bay this year as compared to last.
As if the actual root chewing and turf loss was not bad enough we have just this week been experiencing increased skunk and raccoon activity as they feed on the mature grubs. It would be nice if they were able to extract the grubs without tearing up the turf but unfortunately that is the case. We will set traps and try to relocate as many mammals as we can but I think we might be in for a headache with these critters this year.

Posted by Matt Dillon - Golf Course Superintendent at 7:53 AM