Spring In The Air

It's has been far too long since I updated progress on our new Granite Bay Golf Course creating a lengthy catch up scenario and a mea culpa from the golf course superintendent. Hope this update answers any questions you might have regarding progress on the golf course.

Currently the golf course has been open just over five months to the membership after a full course renovation and turf conversion in 2021, which took eight months from February through September. As a reminder we opened the golf course to playable but not pristine conditions, with cart path only as we were still growing in the new course, but wanted to get our members back to playing golf at their club

The scope of the work that was accomplished during the eight month renovation were:

Additionally:This amount of work could have gone beyond a year and squeezing it all in in eight months has produced a lot of loose ends that needed to be tied up afterwards. And we are still in process of tying those loose ends up.

Another fact to consider is that from the time we opened in October, a full 75% of our GCM man-hours have gone into maintaining and prepping for play the golf course and its associated infrastructure. That only leaves a fraction of available manhours for the important and visible non-recurring tasks such as:

These are just as some examples. We have a large list of these non-recurring items and are working with the Golf Committee on prioritizing them.

I can tell you that we are currently awaiting split rail fence material that has been ordered and paid for a month ago and are caught up in the supply chain. As soon as we receive the material we will repair the fence. We plan to install the fairway markers after our initial fairway sand topdressing coming up in April. We are planning installing supplemental irrigation along pond edges on #1 & #9 in which the new windows we opened up on the pond edge will be unsightly without the irrigation help. We are also currently tree pruning and clearing brush  behind #14 green which will lead us up the left hand side of #17 fairway and behind #17 green to Volcano Ridge. This will bring us into spring and the waking up of the new Santa Anna and continued grow-in.

The sprigging process of converting from cool season turf to warm season turf like we did to our tees and fairways takes time to establish. This timeframe requires establishment and grow in during the warm season of its first year. Our sprigging process didn't happen all at once, but over several months. We had to get the fairways to full turf cover prior to the onset of cool weather realizing that there was no potential for continued growth November through February. Holes that were sprigged very late in the process such as #12 & #17 we overseeded with cool season grass to provide cover the first winter as we were running out of time to completely fill them in. That cool season grass will be chemically removed when weather warms up and the underlying Santa Anna can completely fill in giving us consistent fairway turf throughout the course.

All of our first year, first winter issues with fairways and tees such as: small areas with limited coverage, weed encroachment and lack of uniform aesthetics in areas were all entirely predictable. It won't be like this in the future. We will have different strategies available for say weed control that were not prudent for a very young stand of turf in year one.  Once the Santa Anna wakes up from year one, we will refine it with more topdressing and fertility. The fairways you are playing on in this first winter will be totally different moving forward. They will be denser, firmer and weed free.

Bare areas and many uneven areas will grow and fill in with this fertility and topdressing once the turf starts to grow again, and it is waking up right now. If there is any bare area too large to cover quickly by just growing in, we will sod it with the same Santa Anna Hybrid Bermuda as we've been doing since October. The patchiness, voids and much of the unevenness will be a thing of the past once we get growing weather to further refine these surfaces.

Areas around the greens that were not re-sodded during renovation are what I refer to as "tie-in" areas. These areas didn't get seeded until late in the process after we were opened this fall and we had limited success as winter set in, and everything slowed down including cool season seed germination. Winter weather has been dry and daylight hours warm but still not conducive for aggressive cool season turf growth.  (Additionally we are bumping up against a seed shortage that is stalling our current seed order for continued tie in work). That is all changing right now as this year's early spring and longer days is very advantageous for getting these tie-in's right. We plan to take advantage of the good March weather and start prepping these tie-in areas along with the rough this coming Monday 3/14/22 and seeding them when seed arrives, hopefully this week.

We have started to cut the putting surfaces down and have been topdressing them through winter. We will need to spike them in the near future with small tines to open up airways for continued root development and removal of some of a thin organic grow-in surface layer that is disrupting irrigation infiltration. This nonaggressive procedure should not effect putting quality. Nonintrusive cultural practices are how we hope to maintain these new greens as a poa prevention strategy that also has the added benefit of a consistent putting quality that is not majorly interrupted. The trick to being able to do this is light and frequent applications of sand. 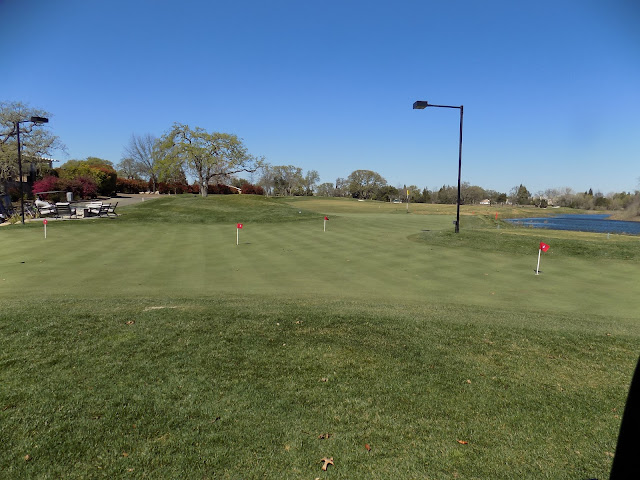 Bunkers
The new bunkers at Granite Bay are smaller and there are fewer of them. They were not designed to accommodate a mechanized rake so we hand rake them every morning. The bright white sand is attractive, but algae growth either thrives or is more visible in this sand, requiring frequent cultivation to aerify the sand to combat the unsightliness of the algae. Another issue with bunkers in general is during dry winter months when irrigation nor rain is occurring, the sand in the bunkers dries out quickly. We can assume our bunker sand dries out quicker then most as it all sits atop a gravel drainage field. And no matter how angular a sand is, if it is bone dry, there is potential for a buried lie. During the growing season bone dry sand is not as much of an issue as irrigation is occurring consistently, but then the algae can become a problem. Recently we have had to irrigate the course because of such dry conditions and the bunkers have benefited from it, but if the sand dries out completely, as can be the case in dry winters such as these, the bunker will play differently.
We recently started smoothing the edges of the bunkers and raking the bottoms to good reviews from membership. The feeling is balls that are traveling across the turf, not necessarily  landing on a fly, have a better chance of settling in the bottom rather then hanging up on a steep face or catching in a lip. The smooth edges are potentially more susceptible to algae growth but we'll deal with that issue if and when it occurs. Regular checking of sand depths is a BMP for maintaining these bunkers as well and we are doing this frequently, adjusting sand distribution to approximately 1.5" to 2" on the faces and 4" in the bottoms. 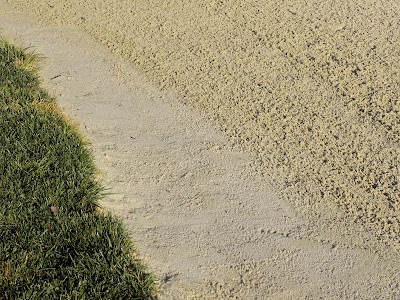 Irrigation system mapping and various wiring issues identified during the mapping process are other behind the scenes items that we have to work on as the irrigation system is key to the golf course survivability and success. This system had substantial modifications during the renovation process and mapping of those changes is crucial to it's management, along with troubleshooting and repairing the recently identified wiring issues compromised during the construction process.
The heart of the irrigation system is our pump station that delivers the irrigation water to the course. This pump station has outlived its effectiveness and now needs replacement. This replacement is slated to commence this spring and will be done in phases as we will potentially need to irrigate the course during this period. I mention these infrastructure items because they are crucial to the courses existence and therefore, indirectly the Member experience.

It will still take some time to complete what was started in February of 2021 at Granite Bay Golf Club. It's that simple. It needs a couple of birthdays. I believe this golf course will be great in 2022 as many of the establishment and grow-in issues will be a thing of the past. But I also believe this course has the potential to be even better in 2023 and beyond as it matures even further and accumulates yet another years worth of topdressing sand. Everything we need to accomplish this is in place.

All we need now is time.

Thanks for your patience and support

Posted by Matt Dillon - Golf Course Superintendent at 8:29 AM

Email ThisBlogThis!Share to TwitterShare to FacebookShare to Pinterest
Labels: Hybrid Bermuda, The Project 2021